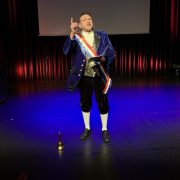 It was the eleventh of the eleventh, in the charming Periscoop Theater in Gorinchem when the 5th ManualMaster congress took place. We, as their sister company, were proudly present at this special edition.

The set expectations were great: With the topic of sustainability and future addressed by speakers like André Kuipers and Raimon Loman, this congress would be inspiring and informative. And it was.

Once the visitors settled in the room, accompanied by the song “Jolene” performed by Close Harmony – True Colors, they were welcomed by the town crier of Gorinchem. He took the audience on a poetical journey through the many aspects of the beautiful stronghold, followed by the first speaker of the conference taking the floor.

Raimon Loman of Dutch Flower Group illustrated the growing importance of sustainability in the sector. What started as a side task as a sustainability ambassador, has grown considerably over the past 10 years into several fully-fledged positions in a wide range of organizations. Transparency, CO2 emissions, living wages, and crop protection products are a few examples of topics contained in the sustainability targets that DFG strives to achieve in its long-term plans, in order to make the chain, the people, and the planet better, one step at a time.

However, these targets were not the take-home message of this enlightening session. Raimon strongly believes in his mission to make the market more sustainable, which has also been the constant factor in DFG’s numerous collaborations with both competitors and various agencies: “We can’t do this alone, we need the whole sector. We have to do this together.”

This theme of cooperation and transparent processes was flawlessly carried on by André Kuipers, who has literally seen this world from the other side. The tone was set quickly when the first photo of the Earth from the moon appeared on the screen: “We saw that we are all in the same boat. The boat of space rocket Earth. This is all we’ve got.”

First of all, André outlined the importance of space travel and the indispensability of satellite information for a range of fields, varying from daily GPS navigation to targeted crop monitoring and food security projects. Especially in the Netherlands, the satellites serve an unexpected yet crucial purpose: detecting changes in the height of dikes, even by one millimeter. When it comes to sustainability, satellites are invaluable as well. Observation of melting polar ice and the resulting water flows are examples of topics that are constantly on the radar of (inter)national research and management agencies.

The presentation progressed from earthly to space applications. The visitors learned which systems are used for the quality of life of astronauts in space. From Microsoft Office to temperature control, system management, and food growing on board; it is all about streamlined software and the countless teams of all ages and backgrounds that work on it together.  The best example of this is the International Space Station. Since 1998, this station has been expanded with both residential and research components from different countries which are united in science, regardless of (old) political disputes. With the first component from Russia, an American coupler, a Canadian robotic arm, Japanese and European living units, and finally Dutch solar panels, this global cooperation might as well deserve a Nobel Prize!

Of course, it is of great importance that the new generations of scientists also develop this passion and desire for cooperation. The current SpaceBuzz program was set up partially for this purpose. In this programme, children are given the opportunity to discover space travel through a school project and carry out various educational tasks, before finally experiencing the launch of a spaceship in virtual reality in a spaceship simulator. We would like to thank Team SpaceBuzz again for making the simulator available during the conference!

After the break, the visitors were updated on the new developments within ManualMaster, followed later by an explanation of a new system on the platform that makes it possible to internally consult experts within certain fields via the platform. This new way of interaction further stimulates professional development and cooperation within organizations, which benefits everyone involved.

This informative update was followed by a presentation by Mirko Vaars, data scientist at research & prototype studio BIT. Various topics were covered: robotics, LiDAR scans, and software for daily use. Fred Vahlkamp, founder of ManualMaster and co-presenter of the evening, got the chance to demonstrate this software. The speech-to-text application shown is a very promising tool that makes it possible to make reports directly in the ManualMaster software via speech. New developments like this are continuously being worked on and tested to improve the user experience, driven by market demand as well as by the organization’s CoLab sessions.

The afternoon ended with several short, personal stories told by Fred. Stories that made the audience hang on his lips. This way, the conference ended with a powerful message: “When we do things, let’s please do them together. In the end, that is the most important asset we have.”

Sustainability is our top priority